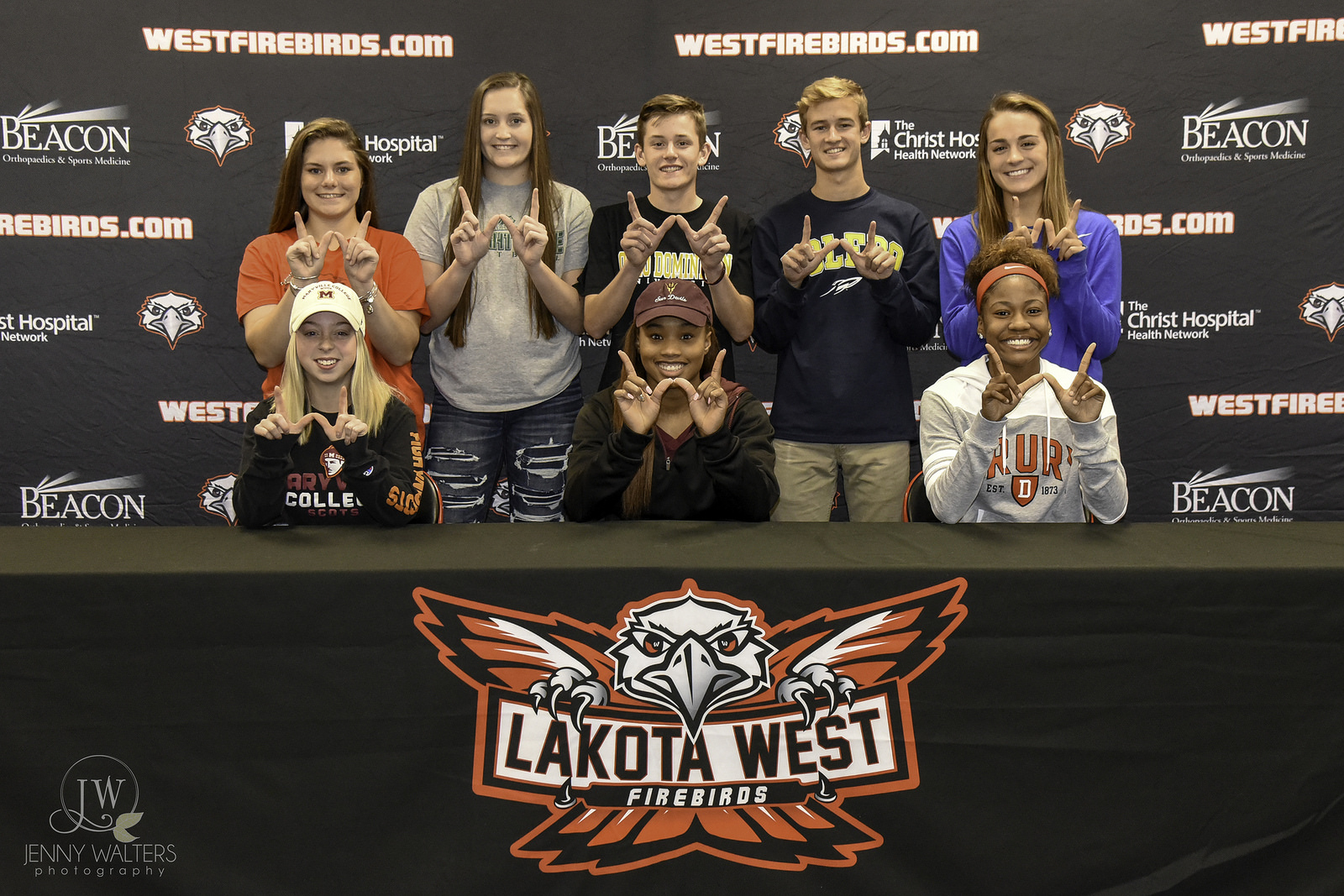 A very special thanks to Jenny Walters for her professional photography of the event!  Link to photos

Sydney Benning is a 5’6” transfer from McAuley High School where she averaged 5.5 pts, 3.1 rebounds, 1.8 assists and 2.3 steals per game last season on a team that finished 20-4.  She was named All-Conference (GGCL) sophomore and junior seasons. “Sydney is a great addition to our program. She lights a spark defensively with ball pressure, anticipation, and getting touches & steals in passing lanes. She also rebounds very well from her position.  Syd’s offensive strengths are her ability to move without the ball, convert passes to points finishing layups, and knock down medium range jump shots. We expect her to make a big impact this year improving in all facets and help her become more college ready for a successful transition to Drury” said Lakota West Head Basketball Coach Andy Fishman.

Cam Wesley has been a starter on the varsity softball team since her freshman season including the OHSAA State Runner-up team last season.  Wesley’s batting stats have increased every season including a junior season where she hit .393 with a .443 OBP in 29 games.  She was named second team All-GMC as a sophomore and junior.  “Cam loves the game of softball and works at getting better year round. She has been one of our top hitters the past 3 years here at Lakota West.  We are looking for Cam to have a great senior year this spring,” said Lakota West Head Softball Coach Keith Castner.

Remmington Steckler was the starting shortstop on last season’s junior varsity team and was used as a designated hitter for the varsity team in the post-season run to the OHSAA State Championship game.  “Our softball staff would like to congratulate Remmie for all her hard work. Her passion for the game has paid off.  We are excited for her Senior season,” said Lakota West Head Coach Keith Castner

Sophia Denison is a four year varsity defender/midfielder for the Firebirds.  She’s a three time All-GMC winner and named 2nd team OSSCA All-State her senior season. “Sophia exemplifies the qualities and characteristics we ask for from every member of this program. She is a natural born leader, with an incredible amount of technical ability, tactical vision, work rate, and an ever growing knowledge of the game. She is a natural leader of her peers, respected and yet a heart of pure humility. An outstanding individual on the field, in the classroom, in the community and with her peers, with an incredibly successful career ahead of her at St. Louis University,” said Lakota West Soccer Coach Brigit Reder.

Alina Miller is a level 10 gymnast at Perfection Gymnastics.  Miller has won multiple USA Gymnastics state championship titles on bars, floor and vault.  She has qualified and competed at Regionals and Region 5 training camp.  “At Perfection Gymnastics, we are thrilled for Alina and the opportunity to continue her gymnastics career at such a great University as Arizona State.  Alina’s thrive, dedication and hard work has put her in this position and we are certain she will continue to succeed academically and with her new gymnastics team.  Alina’s leadership and enthusiasm in our team has been invaluable.  We will definitely miss her and all the great strengths she brought to our program,” said Perfection Gymnastics  Head Coach Enrique Trabino.

Alex Kelker is a four year varsity distance runner on both the track and cross country teams. Kelker has been named All-GMC twice and a three time individual regional qualifier in cross country. In track, Kelker won the district meet his junior season in the 800 and finished 2nd in the 1600.  Kelker also swims on the varsity swim team in the winter.  “Alex is a self-driven athlete, he is always trying to find new ways to improve his running. Alex also has great leadership potential he constantly helps shape and mold younger athletes, both by leading by example and speaking up when he needs to.  Alex has unlimited potential and his best running is in front of him, expect great things from him in the future,” said Lakota West Cross Country Coach Sean Hart.

Jacob Brownley is a two-time First Team All-GMC achiever.  As a senior, he was the only Firebird golfer to advance to districts and finished 10th overall.  “Jacob is a tremendous story on how HARD WORK pays off. He has improved more than any player I’ve ever coached at Lakota West. His inner drive to become elite has been amazing to watch. He will have a great collegiate career at Ohio Dominican University,” said Lakota West Golf Coach Chris Conway.

Laurel Russell is a three year varsity Firebird golfer.  In 2018, she averaged a 47.20 score for nine holes this season and led the Firebirds in two events this season. “Laura constantly demonstrates her passion for the game of golf and her devotion and dedication to improve her skills.  Her hard work has paid off over her time on the team.  For the last two years she has been an important part of the varsity squad shooting scores as low as 80 this year.  She has been Athlete of the Week, a mentor for the younger girls and an upbeat positive influence for our team,” said Lakota West Golf Coach Linda Coffey.