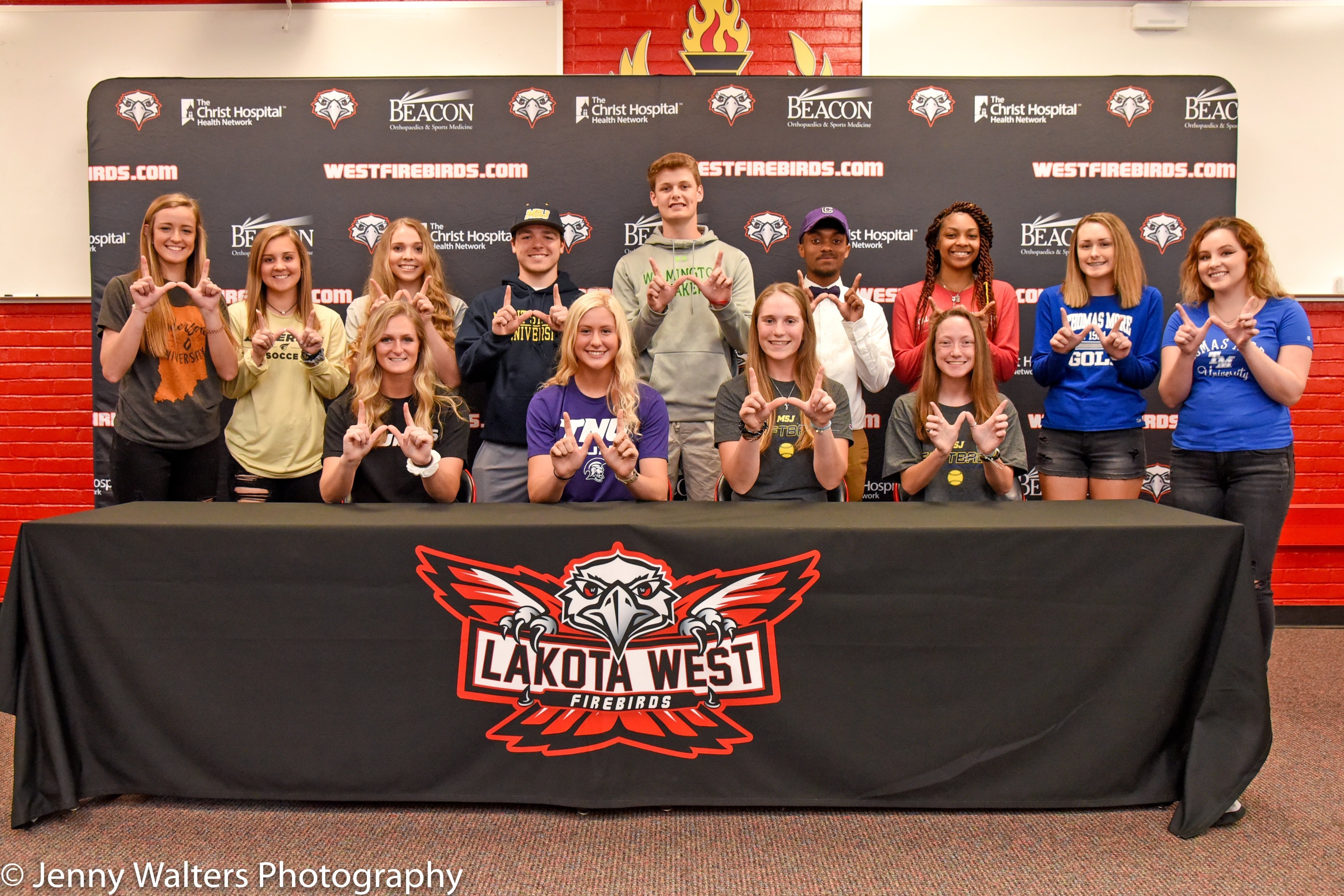 A very special thanks to Jenny Walters for her professional photography of the event! Link to Full Photo Album.

Casey Bramble hit .349 her junior season and led the team with 28 stolen bases (school record) as a starter on the OHSAA Division I State Runner-Up team. After 14 games this season, she’s hitting .385 with a .429 on base percentage and starting in centerfield. She was named 2nd-team All-GMC in 2018.  “Casey is an extremely hard working softball player that wants to get better every day. The coaching staff is very excited for her and feel she will have a great season this spring. Casey has been a major contributor for the Lakota West Softball Family on and off the softball field. We wish her the best of luck in college,” said Lakota West Softball Coach Keith Castner.

Jenna Harris has split time as a varsity pitcher the last two years. She was 5-1 her junior season and also hit .298 with 47 at bats. Halfway through her senior season, Jenna is 3-2 at the mound with seven appearances. “Jenna is an extremely hard worker. She will always put the team first. The softball staff is very excited to see her have a successful senior year. Jenna is ready to have the softball in her hand on the pitching mound. We wish her the best of luck in college,” said Lakota West Softball Coach Keith Castner

Alyssa Triner has been a familiar face in the Lakota West infield since her freshman season. In her junior season, she hit .484 and an OBP of .566 while also recording 15 stolen bases. As a senior, she’s hitting .447 with a team leading 28 RBI’s. She was named 1st team All-GMC as a junior and 2nd team All-GMC as a sophomore. “Alyssa’s has been a mainstay at 3B for the past three years and we are looking forward to her having another great year there this spring. She has been one of our top hitters the past 3 years here at Lakota West. We wish her the best of luck in college,” said Lakota West Softball Coach Keith Castner

Alyssa Witmer has been the team’s back-up catcher for the past two seasons. In her senior season, she’s currently hitting .429 with seven at bats. “Our softball staff would like to thank Alyssa for all her hard work. Her dedication to Lakota West Softball will help our team in the upcoming season.  Alyssa will do anything for our team. We wish her the best of luck in college,” said Lakota West Softball Coach Keith Castner

Matt Brankamp is a two year varsity starter for the Firebirds at catcher and the outfield. His junior season he hit .333 with a .389 OBP. Halfway through his senior season, he’s hitting .333 with a .459 OBP. “Matt’s lead by example attitude will be a great asset for Mt. St Joe next year.  He will represent the Lakota West baseball program well and we look forward to following Matt’s career through the upcoming years,” said Lakota West Baseball Coach Brad Gschwind.

The senior first baseman and designated hitter is currently hitting .286 for the season including four doubles and one homerun in 21 at bats.  “It is exciting to see the hardwork that Brandon has put in has paid off.  He will be a great representation of the Lakota West baseball program as he continues his baseball career at Wilmington College next year,” said Lakota West Baseball Coach Brad Gschwind.

Aiden Manning has been a Firebirds starting midfield player since his sophomore season. “Has been a great role model to his teammates by his never quit attitude both during games and practice. When on the field he’s exhibiting total commitment and desires for winning,” said Lakota West Head Coach Dave Reed.

Florine Sanchez has been a 4-year varsity tennis player in both singles and doubles.

In both her freshman and senior seasons, she was named All-GMC honorable mention on the 1st team doubles. “Florine has an impeccable work ethic both on and off the court.  She always showed up ready to compete.  She represents herself, her family, and the Lakota West community with great character,” said Lakota West Girls Tennis Coach Nicole Lampe.

“Sarah is an incredibly hard working, self-motivated, high class young lady with a bright career ahead at Anderson University. She has emerged from the JV level after her Sophomore year as a leader amongst her peers, and earned an important role within our team. Anderson is extremely lucky to have her, as I have no doubt she will help elevate the players around her, bring a blend of next level talent and drive, all while excelling academically and growing in her faith,” said Lakota West Head Coach Brigit Reder

“Brooke is a loyal and hard working young lady who see’s the big picture for her career on and off the field. She is dedicated to her improvement and is willing to make the sacrifices to achieve the goals she sets for herself. She has been a wonderful addition to this Lakota West Program and we are excited to see the continued success she will find at Anderson University,” said Lakota West Head Coach Brigit Reder.

Jaydis Gales has been a three year varsity letter winner at Lakota West. Her senior season she averaged 7.8 points per game and the average free throw percentage on the team at 95.5 % (21/22). “Jaydis provides her team with positive energy in practice and during games. She has distinguished herself throughout her varsity career as a player who can score the ball in streaks from the inside and out while also defending the post and the perimeter with skill and toughness,” said Lakota West Head Coach Andy Fishman.

“She constantly demonstrates her passion for the game of golf and her devotion and dedication to improve her skills.  She has been Athlete of the Week, medalist in our matches, a 2nd team finish at GMC and a positive role model for the younger players on the team.Brooke will be a great addition to the Thomas Moore Women’s golf team,” said Lakota West Girls Golf Coach Linda Coffey

Abby Wagner is a 3 year varsity player for the Lakota West Girls Golf Team. Abby has been team captain for the past 2 years and one of the top players on the team. Her many achievements include Athlete of the Week, Medalist in our matches, and 2nd Team All-GMC.   She qualified twice for Districts, and helped lead the team to a 1st and 3rd place wins at the Grant County Classic. “She is one of the top players on the team and will make an immediate impact on the Women’s golf team at Thomas Moore,” said Lakota West Girls Golf Coach Linda Coffey.