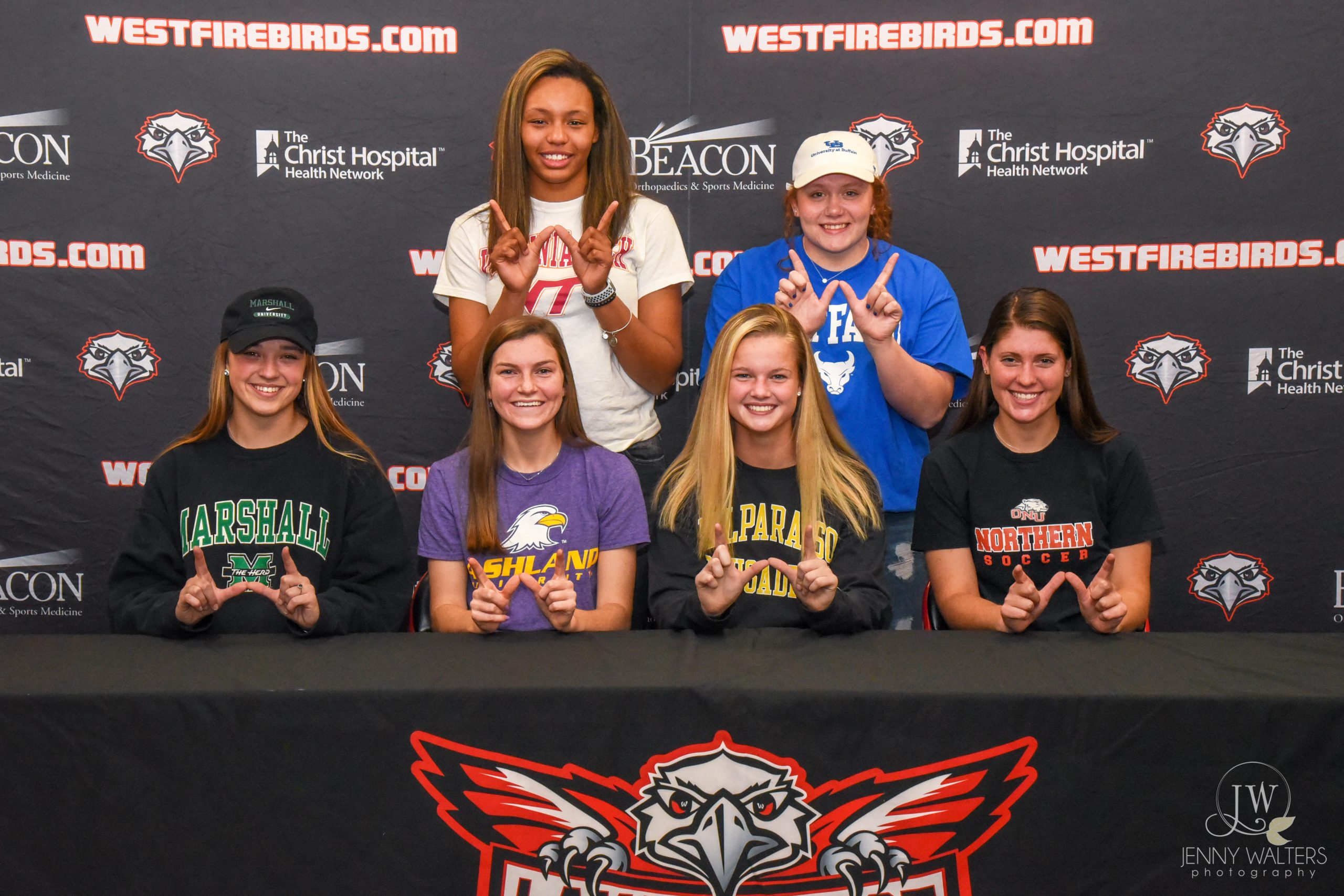 Lakota West Athletic Department hosted the first athletic signing event of the year on Wednesday afternoon, the first day of the NCAA National Letter of Intent signing period for all sports, but football.  The Firebirds boasted six student-athletes signing with their respective schools. Lakota West will host the next two signing events on Wednesday, December 18th and Wednesday, February 5th for football only.  The last signing event of the year for all sports will occur on Wednesday, April 15th 3pm in the Lakota West Community Room. For more information on the NCAA National Letter of Intent Signing Dates, please visit the following website: http://www.nationalletter.org/

A very special thanks to Jenny Walters for her professional photography of the event! Link to Full Photo Album.

The 6’1” wing averaged 9.4 pts, 7.2 rebounds and 1.9 steals as a junior while playing 22 minutes per game. In her three years as a varsity starter, the Firebird team has earned a 72-9 record and two trips to the regional championship. Dean was named first team All-GMC during her junior season. “She does things that don’t always come up in the stat page. Nevaeh comes every day and works so hard. She spends time in the offseason. She puts a lot of time and effort into everything she does,” said Lakota West Head Basketball Coach Andy Fishman.

Grace Glosson broke two Lakota West school records in at the OHSAA Southwest District meet last season in the 100 back (55.72) and the 100 fly (55.40).  She went on to see the medal stand in the 100 back (8th place) at the OHSAA State Championship. She also earned a 14th place finish in the 100 fly and a 16th place finish in the 200 medley relay. “Grace works hard and is always sure to be focused on her goals as well as the team goals,” said Lakota Swimming Head Coach Dennis Beck.

Vanessa Menchofer is a four-year varsity offensive specialist for the Firebirds. She finished the 2019 season with three goals and six assists. For her career, she had a total of 14 goals and 10 assists. She was also named first team All-GMC her junior season and second-team All-GMC her senior year. “Vanessa has been so fun to watch grow and develop over the last four years, as she has dedicated herself to the growth and success of this program. With a resilient attitude, team first mentality, all while setting individual goals and striving to achieve them. She is the type of player a team needs in order to be successful and reach the accomplishments we have been able to this year. We are so excited Vanessa has found a great fit at Ashland University and look forward to seeing all she accomplishes during her collegiate career!” said Lakota West Head Soccer Coach Brigit Reder.

Regan Meyer is a two year varsity starter in the goal. She’s made 99 saves in 24 games and six shutouts during her career at Lakota West. “Regan is the epitome of class, respect, hard work, and drive. She has shown selflessness and the ability to lead through her passion for the game, hard work, and talent in big game situations. We are so excited for Regan to continue her career at Marshall, where we have no doubt she will excel and continue to flourish. She has been crucial to this programs success and we can’t thank her enough!!” said Lakota West Head Soccer Coach Brigit Reder.

Jenna Sitarski is a four-year varsity defender/midfielder for the Firebirds. She wraps up her career with eight assists and two goals at Lakota West. “Jenna has been foundational for the LWGS program, as she’s been a 4 year Varsity member. Her commitment to improving her game, leading her teammates, and being a model for high quality character, is what makes her an incredibly special individual. We are going to miss her as a leader, controlling our midfield, and bringing laughter to our team. Congratulations Jenna, we can’t wait to cheer you on at ONU!” said Lakota West Head Soccer Coach Brigit Reder.

Madison Snowden is a four-year varsity defender. Despite the role of defender, she still finishes her career at Lakota West with five goals and three assists. “Another member who has been pivotal in the rise of the program, Madison has shown her resiliency through the past four years. A leader of the backline, the team, and showing she can battle back from anything the game and life throws at her. We are excited to see what she accomplishes at Valpo and her bounce back from just a minor setback. She is continuing to write her story and we are so thankful for everything she has contributed to this program! Congrats Madison! said Lakota West Head Soccer Coach  Brigit Reder.